Even When I Fall tells the incredible true story of Nepal’s first and only circus set up by survivors of human trafficking. The film’s directors Kate McLarnon and Sky Neal filmed Circus Kathmandu’s journey over 7 years, as two incredible women – survivors of child trafficking – took the bold step of bringing an unrecognised art form to the stages of Nepal.

Prior to the film’s successful participation in the 2016 pitching and funding forum MeetMarket, BAFTA-nominated producer Elhum Shakerifar (A Syrian Love Story) set up a powerful funding strategy, including Kickstarter, to ensure that this story of hope and change is told. Backed with National Lottery funding through the BFI Film Fund and additional support from Sundance Documentary Film Programme, Women Make Movies, Worldview, Chicken and Egg Film Fund and the generosity of a team of people, the film had its world premier at Sheffield Doc/Fest 2017. But since March this year, Even When I Fall had its official theatrical release touring across UK and international venues.

We spoke to producer Elhum Shakerifar and directors Kate McLarnon and Sky Neal to take us through their work journey with the survivors of human trafficking who built Circus Kathmandu as they face the families that sold them and seek acceptance within their own communities.

How did you come across the story of Saraswoti and Sheetal and at what stage did you start filming their journey?

Sky Neal, co-director and founder of the film, originally planned a trip to Nepal in 2010 after being invited by the NGO who were actively rescuing children from circuses and providing them refuge and rehabilitation. A documentary filmmaker and visual anthropologist, Sky also has a background in circus-based performing arts as an aerial artist and was invited by the NGO as a consultant to explore the possibility of using performance as part of their creative rehabilitation programmes, as well as to do some research filming. Sky engaged the young people in creative sessions, which created a space where she was able to build a strong rapport with the young survivors based on shared experiences of circus. They could share their stories and connect through the language of the body. One of these participants was Sheetal, a talented aerialist.  Some weeks into Sky’s trip it was discovered there were several young Nepalis trapped in a circus in Assam, India, and Sky accompanied the NGO on a complex rescue operation. This is where she met Saraswoti, and where the story began. As Saraswoti was travelling back to Nepal she asked : “What will I do now? All I know is circus”.

It was discovered there were several young Nepalis trapped in a circus in Assam, India.

Co-director Kate McLarnon – who had studied Visual Anthropology and worked as an ethnographer alongside Sky in London since 2006 – joined Sky some months later for a follow up trip to Kathmandu. Once she had met the young people and spent three weeks filming and talking with them, she was inspired to keep working with Sky to tell their story, a collaboration that continued to the films completion seven years later.

What were the most challenging experiences during filming and how did your characters start to trust you?

Initially the girls found it difficult to articulate their stories – there was trauma and lost memories, alongside a lack of education and frame of reference for what they had endured. Coming from an anthropology background we learned to use the filmmaking process as a way to facilitate building their confidence and ability to articulate their experience. Using the art of circus also became an important tool of expression, for the young people and for the film itself.

We realised the power was in the undercurrents, things unsaid and remembered.

For a long time we worried that the story lacked ‘action’ as we were often unable to travel to Nepal when things were happening live, due to lack of funds. But as the story unfolded we realised the power was in the undercurrents, things unsaid and remembered.

The story and the issues it touched upon were far from black and white and so we explored the grey areas with the young men and women, often grappling with confusion and doubt themselves. Explorations of memory and personal reflection became a focus of the piece, rather than just a storytelling necessity.

When we were unsure how to move the story forward we would work with Sheetal and Saraswoti to explore how they felt their story could best be told. This lead to the conversations with the families and the intimate conversations they had together on camera, and it became clear as the journey unfolded that they were really embracing the space of the film to ask the questions they wanted to ask, and say things that perhaps they had not previously had a chance to say. We learned about the need to listen carefully for how the story asks to be told rather than imposing an agenda or style from afar. Co-creation with our characters and collaborators became really key for the film as a whole, and an atmosphere of trust which built over the long production time.

What was the most important task for you while editing the film?

Because the story was filmed over six years we had a large amount of footage. Also because of the lack of funding our ability to engage translators early on for the editing process was patchy. So we literally had hours of observational footage as well as interviews to process and prioritise in the cutting room. This meant we had a lot of work to do initially to work our way through the backlog of material.

We had to keep stripping back to stay true to Saraswoti and Sheetal’s story as the central threads but at the same time we had to tell the broader story of Circus Kathmandu. We threw out a lot of versions, even characters who we had come to know and love, and that was painful sometimes! But ultimately we feel really proud of the strength of the two women’s stories, of how they touch on the broader issues while remaining very much their own. Resisting suggestions to put in sign posting like English voice overs or other explanatory devices is something we are particularly happy we persevered with, but it was a significant challenge to ensure the story was told in their own words. 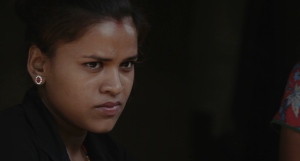 Most importantly we wanted to honour the power of these incredible survivors and it was essential for us that they were portrayed as such, rather than as victims. It sometimes felt like an unpopular and risky decision (there is always a hunger for victim stories, and overall challenges of telling a female lead story) but one we were committed to, and in the end this is what audiences and reviewers really connected with.

Saraswoti has said that she feels so happy to be able to show her story to her three children, who were growing up as we filmed. The group have also taken real ownership of the film and it is now being used as a tool for their outreach work throughout Nepal to raise awareness around modern slavery and decrease vulnerability. This is the kind of endorsement we could only have dreamt of in the edit room. 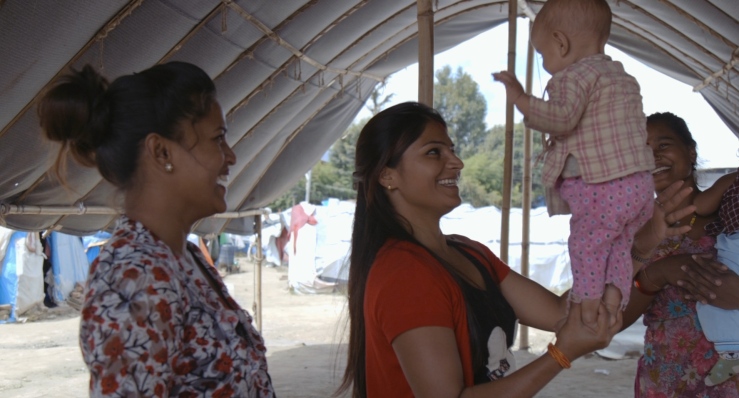 This is a message of hope. In your own words could you explain the rocky road to fight poverty and its consequences such as human trafficking?

This is a big question. As storytellers, we look to make sense of big questions through strong individual stories, narratives that help understand something about the big picture. I feel that we shouldn’t attempt to give simple answers as this would contribute to further exacerbating the problem. Poverty and trafficking in Nepal are complex problems, with many causes and no simple answers. You see a seven year arc in the film – Saraswati isn’t happy at first when rescued. Although she was effectively in a situation of bonded labour, she had a security and a status in the circus, which she doesn’t want to lose.

She struggles to make sense of why her mother would have let her get into this situation – she is hard, angry. Poverty, lack of education, lack of options contribute to a vicious cycle. It takes her years to build up her confidence, to find her own place in the world. The film sees her go on a journey of learning, of understanding her mother, of accepting. It would have been simpler to tell a victorious rescue story but that would hardly have scratched the surface of the complexity we observed whilst making the film. 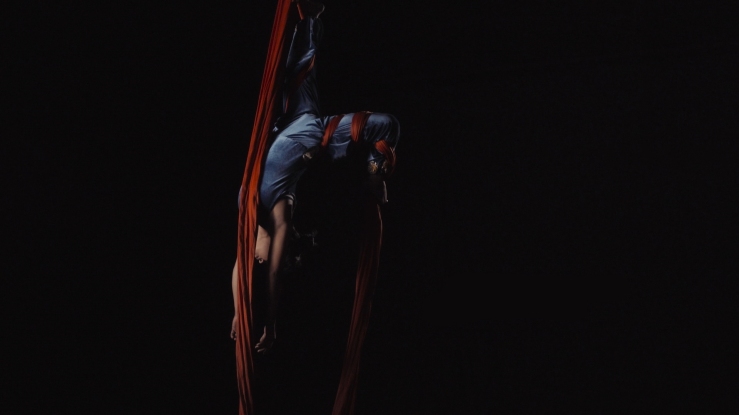 As the film’s producer how would you describe your experience in finding support for the film?

I make films that challenge mainstream narratives but I hadn’t realised quite how deeply engrained representation of women as victims was. In scenarios of trafficking in particular, women are understood only when they are depicted as victims.

The film speaks directly to overcoming the things that oppress you, and to be blunt: most decision makers in our world have not had to deal or overcome oppression.

In making a film about survivors, we were clearly doing something unusual. More than anything, I saw as we were making the film that the narrative we were conveying wasn’t understood by many people. The film speaks directly to overcoming the things that oppress you, and to be blunt: most decision makers in our world have not had to deal or overcome oppression. The young people in Circus Kathmandu are empowered because they reframe the narrative and challenge a status of victimhood.

Making and distributing this film has taught me that victimhood is a piece in the political jigsaw, it’s one part of systems of control. Why is it that empowered women are a harder sell? If the idea of empowered women is unintelligible, then we really must ask ourselves questions about the images of women that are out there, and why. I believe that storytelling takes place at all levels – from production to distribution – and in telling or not telling certain stories, we contribute to motorising certain messages.

What advice would you give to independent filmmakers and producers in order to believe in their stories and projects?

The most important thing is always that you must know why you are telling a story. You must be honest with yourself – even if to nobody else – as to what is motivating you. This will be your driver, and that is the only certainty in the course of making a complex narrative. If you don’t have that driver, that knowledge of what is driving you, then you cannot expect anybody else to believe in your idea. And worse, you are too open to being derailed and it will take you far away from your original intention.

The most important thing is always that you must know why you are telling a story.

Making films is a vulnerable space, it can be a long and lonely process. Surround yourself with people you trust and you can communicate clearly with. And finally, at the risk of sounding crass: you don’t need to be anyone’s saviour. We’re all better off without saviour stories, we’ve had enough of them and they have done nothing but destroy the world. Make films because you want to learn, understand, experience and communicate, because there’s a fire in your belly to convey something that you have come to understand. But nobody needs you to speak on their behalf.